Whats the deal with all the Olympic Lifting

You guys may have noticed but there is a lot going on right now that centers around olympic Lifting. We are about to start a specialty course that will focus on olympic lifting, we are hopefully having one of the worlds best olympic lifting coaches come here in November, and ,for those that haven’t noticed, we have been doing almost exclusively olympic lifting strength work for the past six weeks. CrossFit is about mastering all sorts of different tasks and technique and increasing your fitness all the time. You may ask then, why are we so focused on olympic lifting. Here are a few reasons why.

Olympic lifting is truly one of the best overall full body strength builders around. There are other types of strength work such as powerlifting( movements centered around bench press, squat, and dead-lift) and body building(we prefer to think of this as a dirty word and not real strength). However they do work your body in nearly the same capacity as the olympic lifts do. Oly lifting, as olympic lifting is sometimes referred to, trains the following athletic skills: balance,accuracy, strength, power, speed, agility, and flexibility. It trains every one of the ten general physical skills we aim for here at CFB except endurance and stamina.

But how can two or three movements accomplish such a thing? its simple. The olympic lifts are explosive, dynamic, and very technical. When you are snatching a barbell for the first time, there are pretty good odds that you feel like a very uncoordinated baby deer. To take a weight from the ground to over your head in a second or two is incredibly difficult even with good technique. It requires a tremendous amount of force to move weight in such a manner. It also takes a huge amount of skill and technique to keep the bar in a good position throughout the entire lift for either the snatch or clean and jerk. If you vary the bar path even a fraction of a degree you may miss the lift entirely. Oly lifts also will change the way you think about a certain weight. Yes you probably can dead-lift 200 lbs. fairly easily, but what about dropping underneath it and then front squatting out of what could be the deepest squat you have ever been in?

Probably the most important reason that we like the olympic lifts so much here at CFB is that they translate to other measures of fitness. People who have at least grasped the basics, (I say grasped because those who have mastered them are usually in the olympics) will see other movements come with ease. Good olympic lifters are almost always excellent at things like box jumps and broad jumps. Olympic lifters also pick up on things like kipping and kettlebell swings more easily as well. A good olympic lifter will also have big powerlifting numbers. If someone can squat clean a big weight they can probably squat an even bigger weight. What do you think about the olympic lifts? Post Comments below! 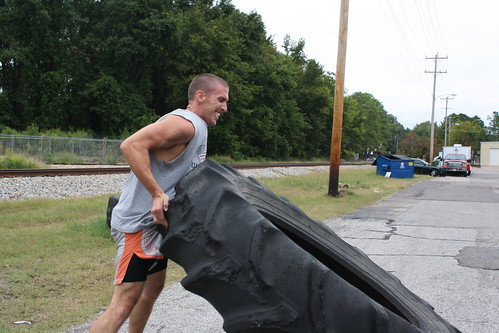