We found the fountain of youth…. CrossFit in Memphis

I put a quote up on our facebook the other day from our oldest member Leo. ?The situation was really comical. ?One of our members who is 52 was complaining about being old. ?Leo, who by the way is 69, looked at the complaining member and said, ‘If you are complaining about your age, you are a candy ass!’ ?It was so funny, I almost cried.

Recently, I read this fascinating study about age. ?In the study they took men who were 75 years old. ?The men had to live in a sequestered place for a while. ?All they could bring with them were things that represented the time when they were 55 years old. ?The researches took pictures from when they were 55 and put those pictures on their name badges. ?They also put out Time and Newsweek magazines from the era. ?The members of the study were only allowed to talk about things that happened when they were 55. ?They spoke of their long retired jobs as if they were still doing them. ?They talked about Reagan’s presidency. ?You get the point. ?At the end of the study of these 75 year old men, some amazing things happened.

I have personally seen this happen with our older members. ?We believe in them, and get them exercising and eating better and they actually look, feel, act, and think like they are younger. ?They also have all kinds of positive mental changes! ?We have truly found the fountain of youth!

Do you ever think you are too old to do this? ?If you being old and ‘being’ old can be two different things. ?What are your thoughts? 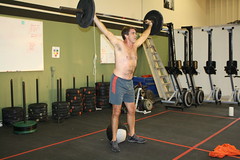