I hoped that grabbed your attention. I do not mean you should never kip, and I hope to make that clear in the rest of this blog. ?In the world of CrossFit, kipping is a common practice. Kipping, in the CrossFit sense of the word, is using your hips to help you get momentum and accomplish a movement. CrossFitters have applied kipping to all sorts of movements from pull-ups to handstand push-ups. However I think that CrossFitters have taken kipping too far. I recently saw a video on kipping the burpee. I kid you not, a coach was going over how to use your hips to make the burpees easier. Now that I know all of you are trying to picture how this is going to be done, I am going to cut you off and explain to you why this is too far and the improper, at least in my opinion, application of kipping.

You’re saying to yourself, ‘I thought kipping was awesome and a super necessary skill to learn!’ It is. However, it should truly only be used in metcons, competitions, and anything done ‘for time’. The point of kipping is not solely to make movements easier, it is also to make them faster. Any work done outside of metcons, such as dips, HSPU, or pull-ups are for strength work not time. Yes that means that the movements in your warm-up are to get you stronger, in addition to getting you warm and ready to go. So when you are warming up or putting some extra work in on your dips you should attempt to be as strict as possible. This means that you may have to scale yourself down to a band or HSPU off of a box, but again it is not a wod, it is to get you better.

Here’s the good news, kipping movements and strict movements are not mutually exclusive. That means that work you put in on one will affect the other. The more work and effort you put into strict pull-ups the better your kipping pull-ups will be. Do not think that just because you are not doing kipping pull-ups, and instead are working on dead hang pull-ups, your kipping will get worse. Kipping is a skill. It is a skill that takes some serious effort to master, however once you’ve got it, it won’t just disappear. If I were to take someone who was proficient at kipping and had him/her train only dead hang pull-ups for six weeks, then the next time they tried kipping they would be as good as or better than they were before. My hope is to see everyone battling to do things strict in the warm-up! Do you guys do strict or kipping in your warm-up usually? Post comments below! 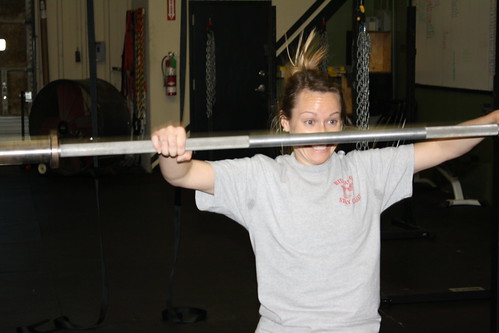