You may have noticed that in CrossFit, we have a standard for everything. Sometimes the standards may seem ridiculous but there are several reasons for the standards we enforce. These standards go from pull-ups to deadlift, dips to air squats, and pushups to presses. The first reason we enforce standards is so that it is fair for everyone in the class in a competitive sense. It’s not fair if the guy next to me is only doing half the range of motion on wall ball and I am doing full range of motion. While it is true that he may get done with his wall balls faster, the standards are there for more than just competitive reasons. As I?ve said before you are competing against yourself above all else. So it really shouldn?t matter whether the guy next to you is only doing half dips or banging out muscle ups.

All right so let’s say you guys are just competing against yourself and no one else. Why do I need those silly standards? ?The likely reason for the standards that you will get from anyone that has been doing CrossFit long enough is comparability against yourself across time. What I mean by that is that without standards you can not be certain of your improvement. Let’s say you that you do Fran but you get to judge your own depth on your thrusters and you gauge your pull-ups on how hard you pull, and you kill it in four minutes. The next time you do Fran it?s the same rules: judge your own depth on thrusters and base your pull-ups on how hard you pull. This time you do it in three minutes. You can?t actually be sure that you did a better Fran because they may not have been the same. One day your hips and shoulders may have been super tight the next day they may have been super loose. You may be pulling harder than you were three months ago on your second Fran. When you lose standards you go into a grey area where you can’t be sure of any improvement. ?It also makes it that much harder to see where you may need extra work. When you hit a PR and can say ?the standards were the exact same as last time, and I did better this time, I am improving,’ that?s a good feeling to know that you are better than you were.

The next reason you will probably hear less often is the standards we enforce put you in positions to do the movement correctly and safely. Let,s take the squat for example, when we are doing back squats everyone squats to a box and an ab mat (or two if your one of the taller members of the gym). You may ask why? When you are squatting and your hip crease passes below parallel you recruit your hamstrings to help you drive that weight up. So when you go below parallel in a movement you?re using more muscle, which means you’re working more. In the long run you will get stronger. Anyone who had been in a gym before CrossFit doing squats (forward and on your toes like myself) may have noticed that when you first do squats at CrossFit Bartlett your numbers drop way below where they were. This was the case for myself I was ?squatting? 225 at Well Worx every other day. However when I got here I had to back down to 135 to learn to sit back on my heels. However, even though I originally had to drop the weight to do it right, I am now squatting more than I ever thought I could. This is because I am doing it correctly and using muscles that were ignored with bad form.

So how does all this talk about standards apply to you guys? Next time you are doing a workout and you are almost getting your head to the ground in a handstand push up think about it in six months, are you going to be happy with yourself doing the work almost? I’m not saying everyone has to do every movement as prescribed. ?If there is a movement you can’t do as written like muscle ups, 255lb squat cleans, and HSPU, talk to a coach. We can find a standard so that in six months you can look back with a 100% certainty and say, ‘I have improved’. What is the craziest standard we do in here? What is a standard you have a hard time holding yourself to? 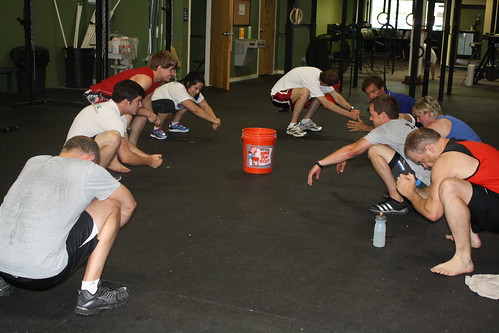