Shortly after 7:15 on the morning of August 7th, 1974, having hesitated briefly because of a strong breeze, 24-year-old Philippe Petit stepped out on a wire he and some friends had attached a quarter of a mile above the Earth between the twin towers of New York?s World Trade Center.

Petit first received the inspiration for his unimaginable walk after coming across a magazine article while he sat in his dentist’s office in Paris. Over the next six years Petit collected articles on the towers and made several trips to New York to make first hand observations of the incomplete towers and to gain a sense of what kind of equipment he would need for the walk. To gain access to the restricted area Petit and his accomplices made fake identification cards and claimed to be electrical contractors installing electrified fencing on the roof. He once pretended to be from a French Architecture magazine wanting to interview the workers on the roof. The Port Authority allowed Petit to conduct the interviews. Petit?s preparation was meticulous. He noted the clothes that construction workers wore, what kinds of tools they carried, and what the businessmen dressed like so that he would blend in with them when he tried to enter the buildings. He also noted what time the workers arrived and left, so he could figure out when he would have access to the roof. Petit and his crew were able to ride in a freight elevator to the 104th floor with their equipment the day before the stunt, and were able to store this equipment just nineteen steps from the roof. In order to pass the cable across the gap, Petit and his crew decided to use a crossbow. They first shot across a fishing line, and then passed larger and larger ropes across the gap until they were able to pass the 450 pound cable across. Guy lines were used to stabilize the cable and keep the swaying of the wire to a minimum. For the first time in the history of the Twin Towers, they were connected. In an event that lasted about 75 minutes, with the aid of 26 foot long, 55 pound balancing pole and without a safety net or harness, Philippe Petit made eight crossings, walking, jumping, dancing, even laying down on the 450 pound wire that stretched across the 131 foot gap between the still unfinished towers.

‘Seemingly, I’m crazy – a suicidal maniac. But you have to enter my world. I work for days, months and years to prepare. My safety net is much stronger than anything else in the world — it’s my preparation,’

He finally came down after the police threatened the use of a helicopter.  He was afraid that the wind would knock him off.  When he came down is quickly arrested.

Why do I tell you this story?  More importantly then the actual event was a recounting of the moment before the event happened.  In an interview Petit discussed his feelings and thoughts.  There was a pivotal moment in his life.  He had spent years preparing for this moment, his preparation was sound, he could finally reach his goal, but something happened…

His lizard brain kicked in and his self doubt crept in.  His desire for self preservation caused him to doubt his ability.  For a brief moment he thought about not doing it.  There was a moment with one foot on the wire and one foot on the building.  It all came down to that choice, to shift his weight forward and accomplish his goals, or listen to his self doubt and step off of the building.

Have you ever been in that moment?  Do I shift my weight forward?  Do I step off the building and onto the wire?  Should I listen to my own self doubt?  Maybe I can’t do this CrossFit stuff.  Maybe I shouldn’t work out.  I might hurt myself.  This might be to hard for me.  I should stay with my routine.  There’s no way I could do that.  Do these voices sound familiar?  Are you listening to your self doubt?  Maybe you should shift your weight forward, take that next step, who knows where it will lead you!  Are you willing to make a weight shift or are you content to step back on to the building where you came from? 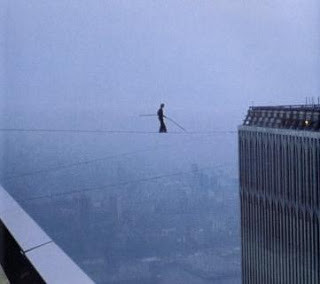