This past weekend, I competed in the LuvMud 5k race on a team with three of my favorite fellow CrossFitters (Amy, Michelle and Josh). The race was an absolute blast, as we got to not only run through Shelby Farms as quickly as we could, but race over a series of obstacles – mud pits, slip-n-slides, hay barrels, walls, etc. There were so many participants in the race that it was held over a two-day period. But even more surprising were the number of kids at the race to watch and support their parents.

After our team had crossed the finish line, a little girl covered in mud came running up to me and Michelle to give us hugs. I recognized her as one of our CrossFit Kids, Maci. She also has a sister in our program, but her dad, Ted, is one of our adult athletes. He was competing in the race on Sunday, so Maci was there to cheer him on and get covered in mud, just like her dad. Seeing her so excited was one of the highlights of the day, and I love that Ted brought her along to watch him exercise and and enjoy some friendly, fun competition. Maci and her sister Kaleigh also participated in the family race on Saturday.

We stress how important it is for parents to be active participants in their kids’ athletic endeavors, but it’s equally as important to allow them to be participants in your (their parents’) endeavors. Parents should exercise not only for themselves, but for their kids benefit. Setting a good example by engaging in fitness will help them prioritize their own health and fitness. Let them know that you work out to stay healthy, to be strong and to have more energy and stamina! If they never see you exercise, or if they always hear you complaining about it, they’re going to have a negative perception of exercise.

It’s also important for them to see you achieve your fitness goals. When I was about 8, I watched my dad run the Los Angeles Marathon. I remember getting up early to head to the race, driving to different points to cheer on my dad and posing for pictures with him after he completed the run. I also remember setting a goal for myself that day – I was going to run a marathon, just like my dad. And since then, I have run three. Watching him train for that race and eventually accomplish his goal of finishing it made a huge impact on me even though I was only 8 years old. I wanted to run just like my dad.

Be your kid’s superhero. Let them watch you work towards a goal and achieve or even exceed it, push yourself past limits you didn’t think possible and give 110% when you don’t think you have anything left. They will not only look up to you, but they’ll want to be just like you, and I guarantee they will be your biggest cheerleader when you need it most.

Maci and Kaleigh after competing in the family wave of LuvMud on Saturday afternoon. Check out more pics here! 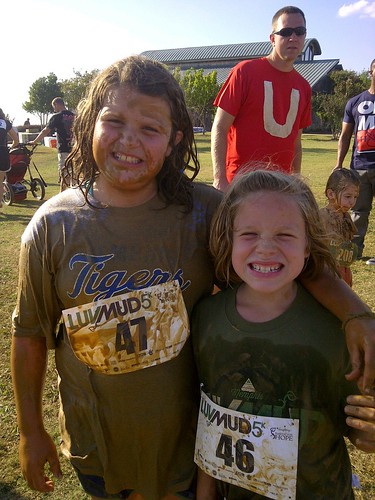